What ultimately inspired this journey was a passion of five people!


In northern Mozambique,Pemba’s small kitesurfing community is drawn to the pristine coastline and peaceful lifestyle of Cabo Delgado,

Away from the Pemba bustle is the area’s best kitesurfing spot and at the heart of the community is Il Pirata, an intimatehideaway lodge – home to Carlo and Susanna, a place for home-cooked Italian food, a kitesurf lesson or an adventure with Carlo exploring the idyllic coast by kite.

This is where the team of seven congregated and conceived the epic challenge. 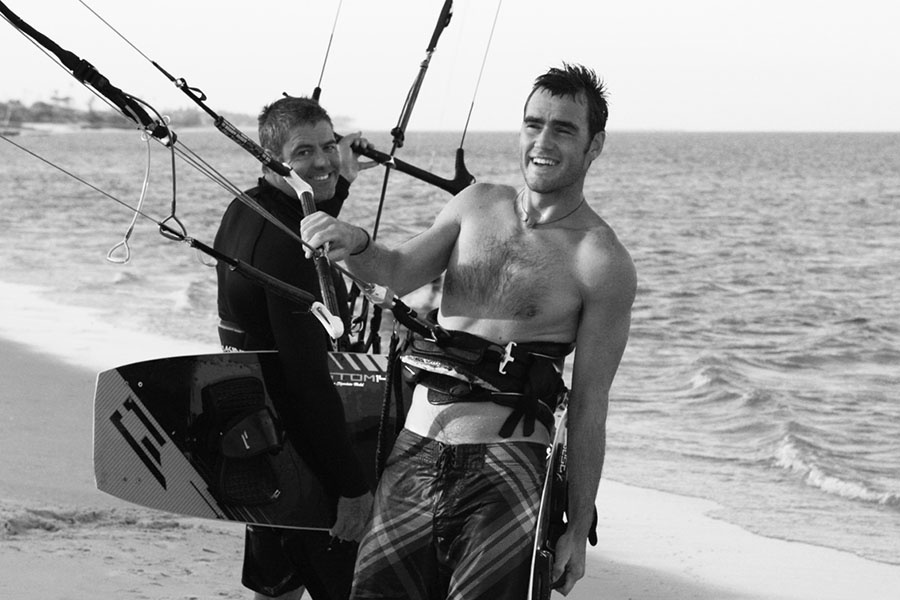 The challenge was to travel by kite the length of Cabo Delgado,traveling between the River Lurio and the River Rovuma, a 210 nautical-mile stretch as the crow flies, culminating in oureight-day adventure. 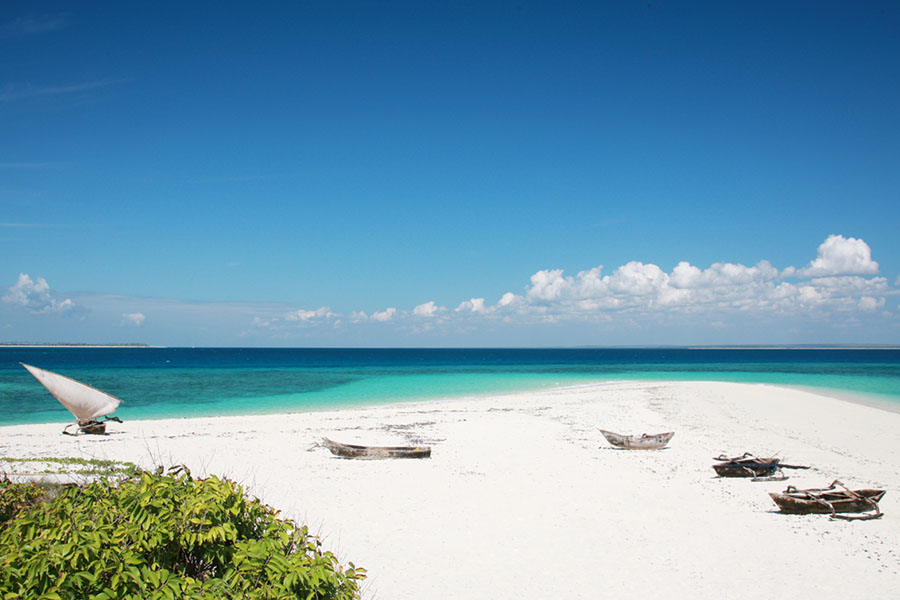 The Kusi has the reputation for being the stronger and more consistent of the two, blowing from April to September.These winds are the backbone of the ancient Dhow trade routes. As far back as AD600 the dhow has been harnessing these winds bringingtrade and wealth – shaping the coastline cultures. To this day the dhow spirit and trade routes continue as local communities rely on these winds as a means of life. 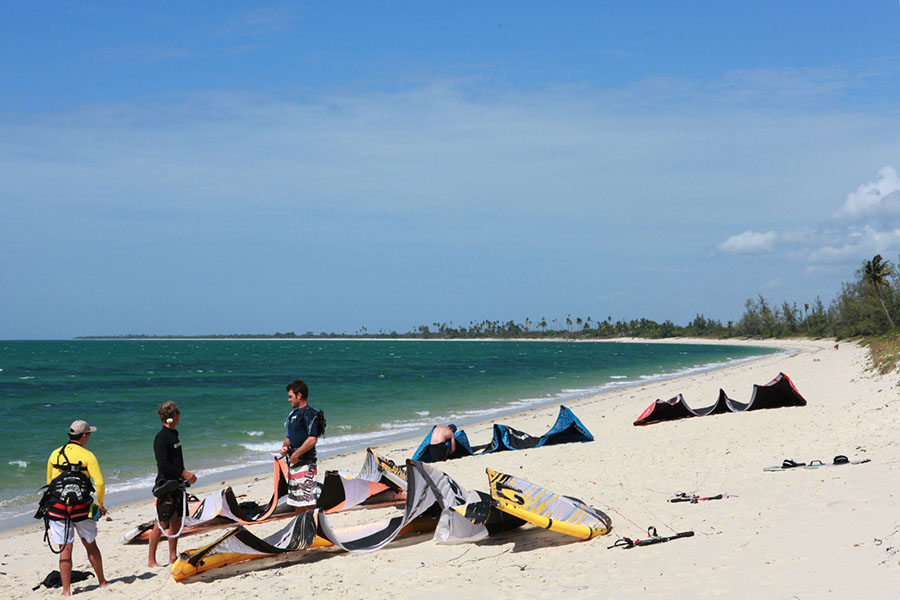 A Kitesurf challenge: an aim to raise awareness for the need of clean water, promoting current community projects in Mozambique and to document a raw way of life, living along the pristine coastline of northern Mozambique 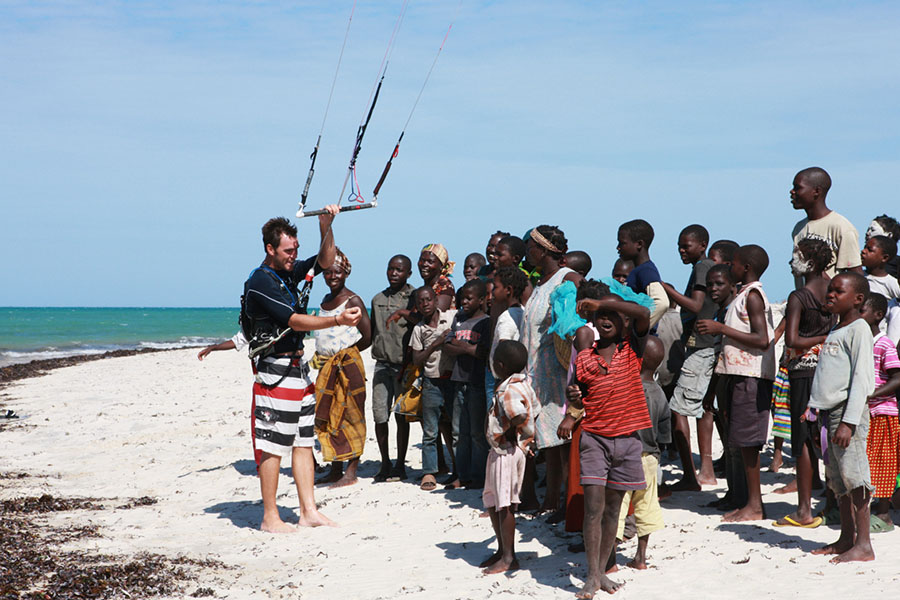 We relied on the Kusito travel our part of the dhow trade route, usinga kite – one of the most modern forms of harnessing the wind.The Kusi lived up to her reputation throughout the trip blowing hard and consistently, though not always on our side. 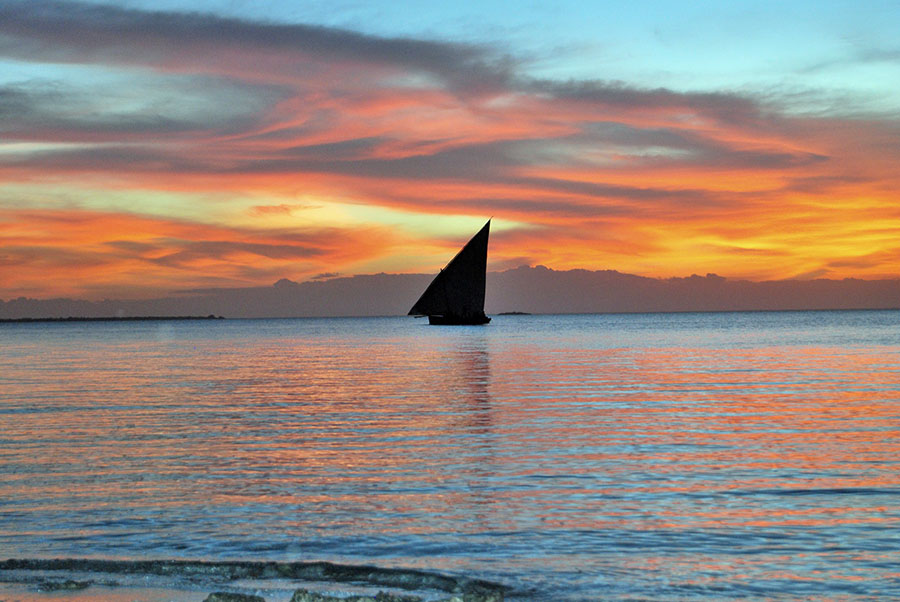 Lacking funds for a fancy support boat, we had no option but to rely on a far from ideal weekend flat-water boat,whose hull wasn’t ideal for choppy seas.

But we had confidence in Geert our Captain. 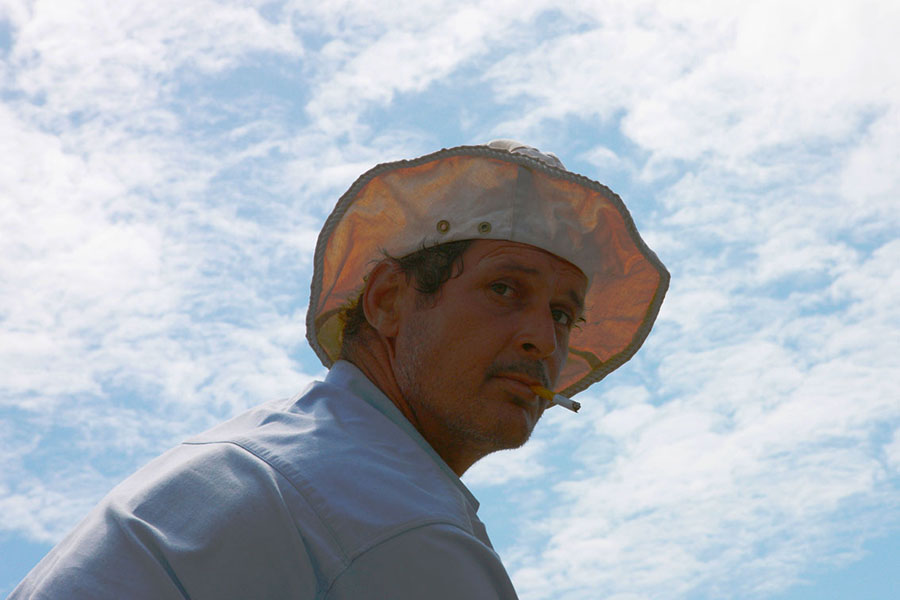 With the seven of us scattered across a remote zone we were already facing a communication challenge. But two days before the trip onset we were able to come together at Il Pirata and managed to finalise our plans.

The mostbeautiful stretch of kiting was day five between Guludo and Queiterajo. Thewind was pitch perfect and the islands pristine, as we cruised past idyllic beachfront fishing villages, fringed by grass roofs and hanging palm leaves. Crowds of excited locals ran along the shores to greet us with beaming smiles, arms waving frantically. We entertained them with a few displays, hoping to leave them with storiesthat may be recounted for years to come. Drawing closer to Queiterajo we weaved amongst the few dotted mangroves and were welcomed byhappy faces. 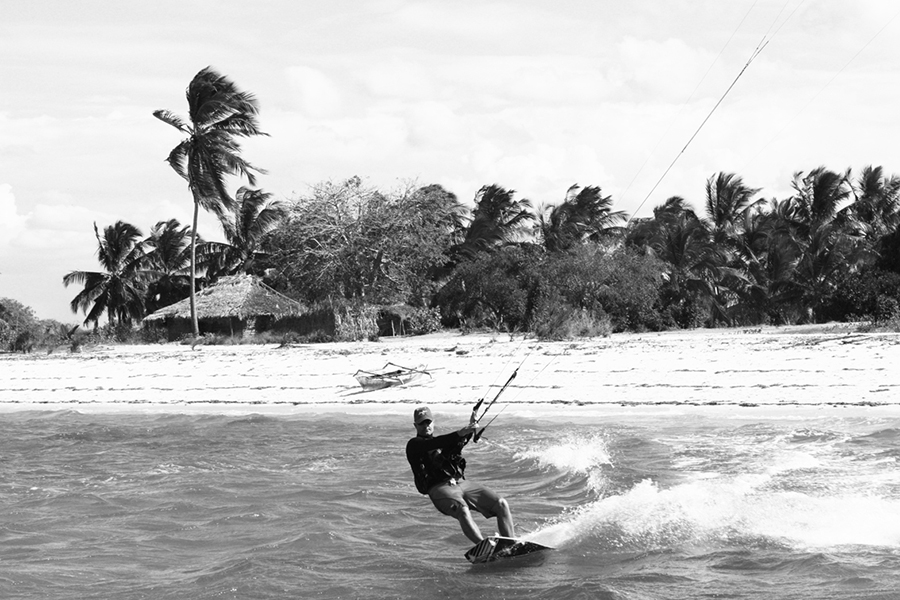 Cat and myself entered the village to greet the chief – Chefi De Aldea and were escorted to his house by Frank, an affable old man we end of day's fishing met en route. He explained about the ‘shambas’ (fields) and the poor crops due to the lack of rains this year – a problem all over the region. We were welcomed to the Chefi De Aldea’s house with warm hospitality. We sat outside on the road on wooden school chairs while we waited for him to return from the mosque.

A curious crowd had gathered and the ensuringintense questioning from them, was broken by his arrival. After a lot of banter and laughter he kindly gave us a few guards for the boat over night, as many fishermen who aren’t local to the area pass through. 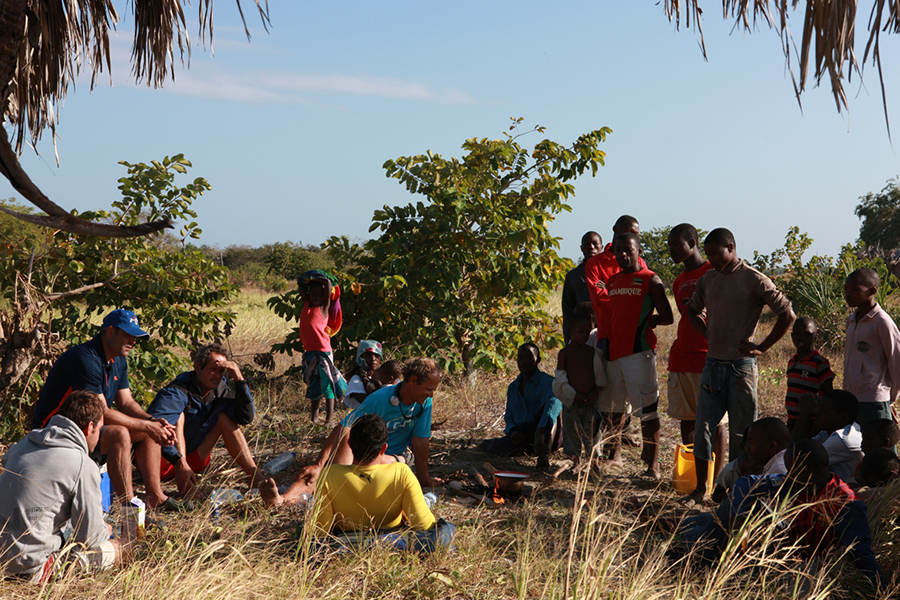 We arrange with the guys guarding the boat that we want to leave by 9am the next day and could they keep the boat floating. The next morning we woke to a low tide and no boat……

Somehow lost in translation, the guards had walked the boat round the mangroves, on the outgoing tide to another spot where we found her lying dry! 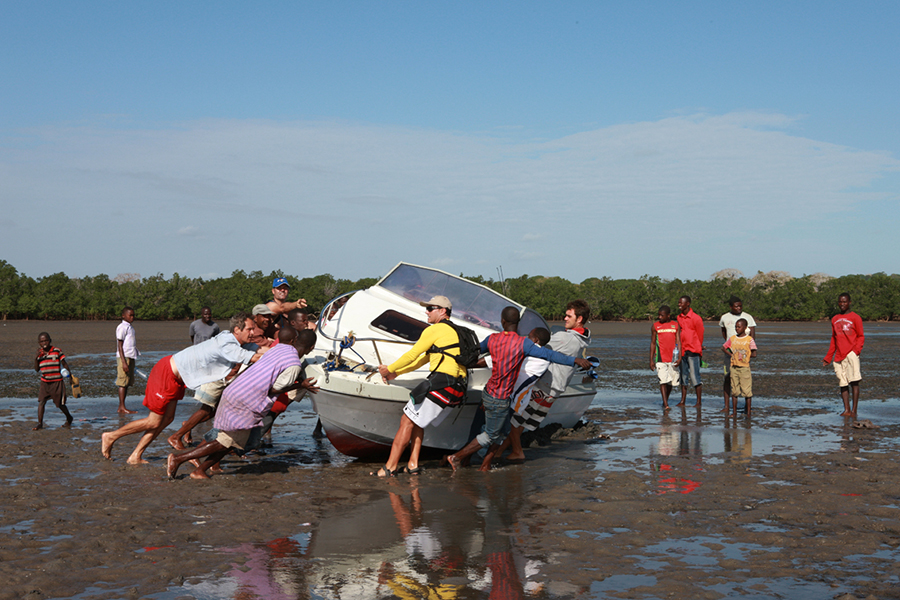 20 strong we push the boat into deeper waters in tune to the rhythm of a fisherman’s song whoat the top of his voice lead us into “ONE STRENGTH”, breaking the suction of the wet sand.

We pumped our kites and headed off waving goodbye to Queiterajo.

Marine life is in abundance.From the Lurio to Il Pirata,we were joined by a Humpback Whale. These curious beasts pass the coastline during July, August and September on their migration to warmer waters to birth before returning south.We were often joined by pods of sociable dolphins along the way and it was hard to keep up with the vibrant dashing world going on under water as we cruised over the fringing coral reefs teaming with life: colourful fish darting off in all directions and the occasional cloud of sand from a ray that had been resting in the comfort of disguise. 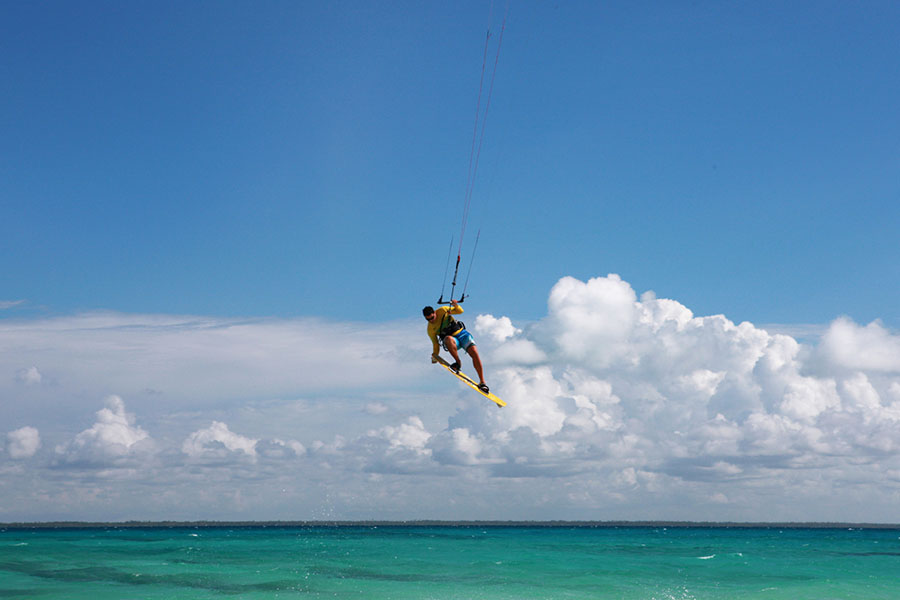 During our stay in Guludo local fishermen told us that elephants had passed by earlier that morning. Based within the Qurimbas National Park, the marine area of the park includes eleven islands, home to the incredibly rare Dugong and several species of shark and ray. Several WWF posts, who are working with the fisherman towards a more sustainable future, protect the area.

Our first challenge was discovering that our experienced trip leader, Carlo, was critically ill withMalaria.It was hard and rather concerning to leave him behind... 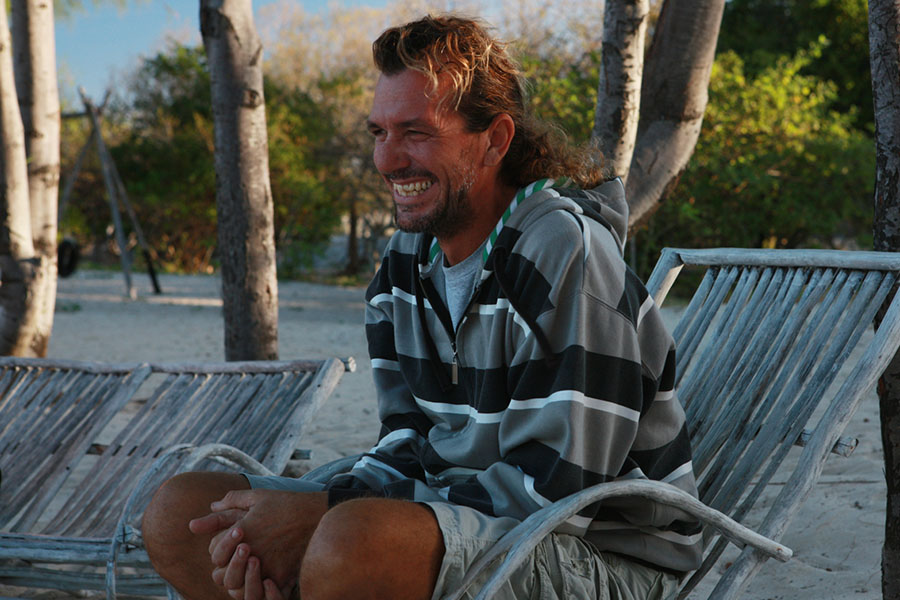 The toughest challenges of the whole trip was to navigatePointa Diablo, known forhuge swell and a vicious rocky coastline. We established protocols to prepare for the foreseeable challenges ahead. 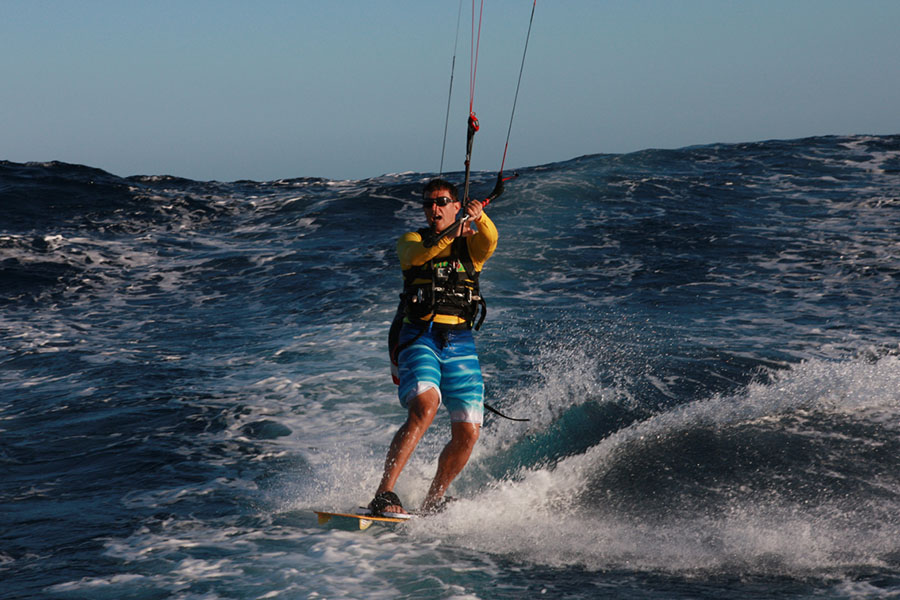 The full force of the Kusi was blowing and swell was huge coming at us from all directions. With compromised and limited communications the group became inevitably separated but thankfully our buddy system held strong.

Nic and Andre reconciled strong currents with 6ft waves breaking on the point’s continuous rocky coastline, whilstBart and myself went further out to sea, battling the huge white capped swell, coming from every direction. It was intense, even experiencing seasickness amongst the giant chop.

The safest route for the boat was to give the point as wide a birth as possible; completely dwarfed by the swell it was clearly fighting its own battle on the edge.

After 4 hours of kiting we had passedPointa Diablo and found safer calmer waters and a brief respite in some awesome waves to play in along the way.

Playing in transparent waves, admiring the reef below, leading onto palm fringed islands, the other kiter’ssilhouetted around you and the big African sun setting over your shoulder into the continent isa feeling you cant describe but can treasure forever. 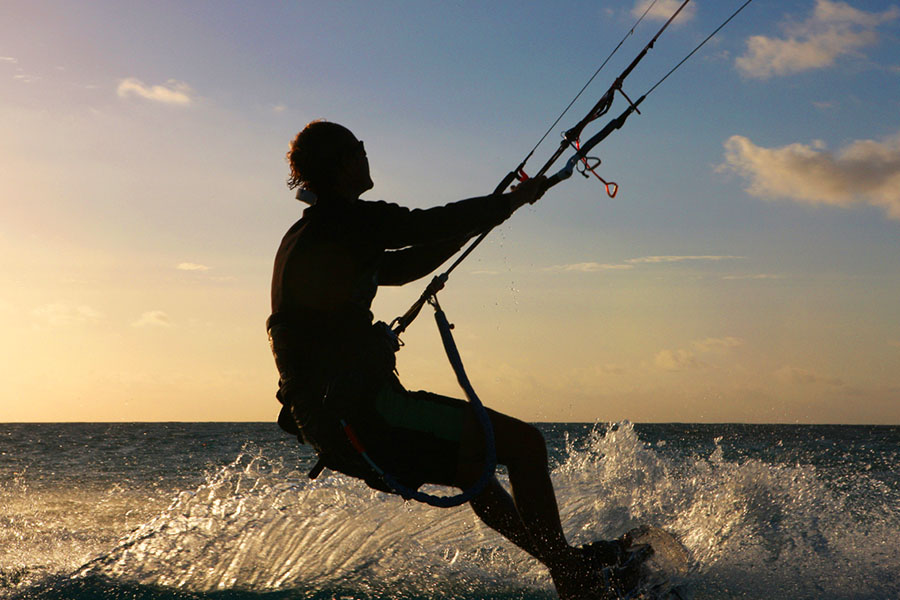 The sun sets fast close to the equator and the next encounter happened as quickly as the sun disappeared. We hadn’t seen a sandy beach for hours but were making good progress in the calm waters on the inside of the reef. Pushing on, Bart and myself suddenly jolted as we hit shallow rocks hard…and went down. After several attempts we found ourselves on a razor sharp urchin infested dead reef in the pitch black. Having a barefoot ethic the thought of footwear hadn’t even crossed our minds. Soat this point we were more than grateful toCatfor insisting that we all had the most uber un-cool sandals!

With a fast incoming tide and the sun disappeared it was very quickly night.

With a display of torches dancing in the distance, we were certain it was the rest of the group but with a large stretch of deep water between us. We decided to pack up our kites and head for the island, a black band on the horizon. We felt our way through waist deep water often disappearing into holes, clambering over rocks and urchins. Neither of us could remember if the Island was lined with cliffs or mangroves. And we wereCOLD by now, nine hours of kiting, wet and hungry.

A gruelling two-hour struggle later we reached the black band and it wassurrounded by dense mangroves. We drained as much water as possible from our kites and repacked them with the intention of trying to walk along the tree line until we found a way in. But we were quickly put off by knee deep sticky mud and a tide in fast pursuit. The trees offered some protection away from the wind. Exhausted, we staggered into the trees, tethered up our boards and climbed into a tree, wrapped in our kited cocoons to ‘sleep’while the tide came in and went out.

The rest of the team were eventually safe on a neighbouring island, Qurimba. Separated for the night and unsure of each other’s ‘location’ it was a long night! 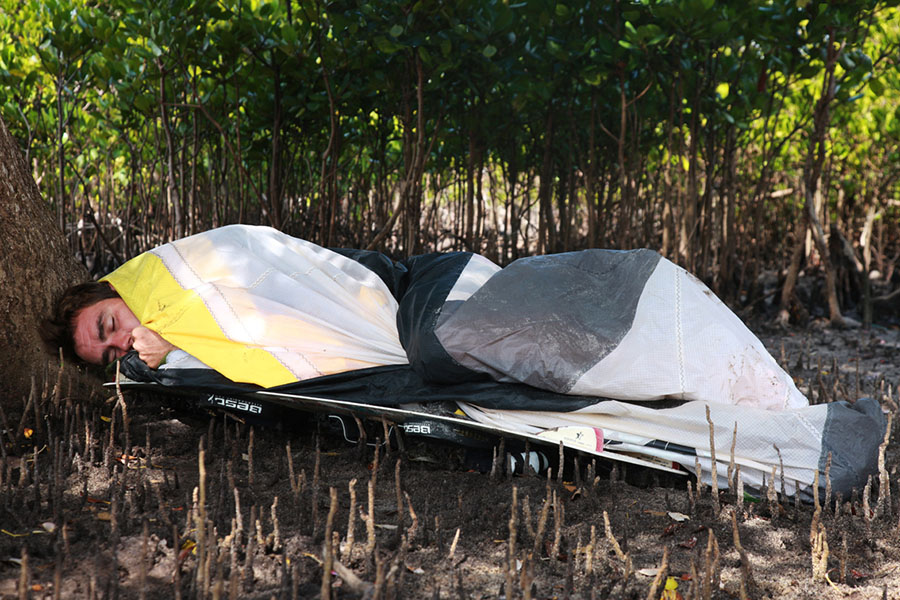 The next morning we woke curled up on our boards on top of the muddy roots, after a night surrounded by black cloudsof mosquitos. We both subsequently got malaria, which is yet another experience we won’t forget in a hurry. It seemedeven harder to get ourselves out of the day lit mangroves than it was navigating our way in – in darkness.

A fisherman kindly led us through a maze of streams in the dense mangrove forest and eventually into the open, across several fields and into Ibo town.

The team was reunited here and we had a chance to nurse our cuts dig out some of the thousands of urchins in our feet and repair our kites, before we were on our way again. 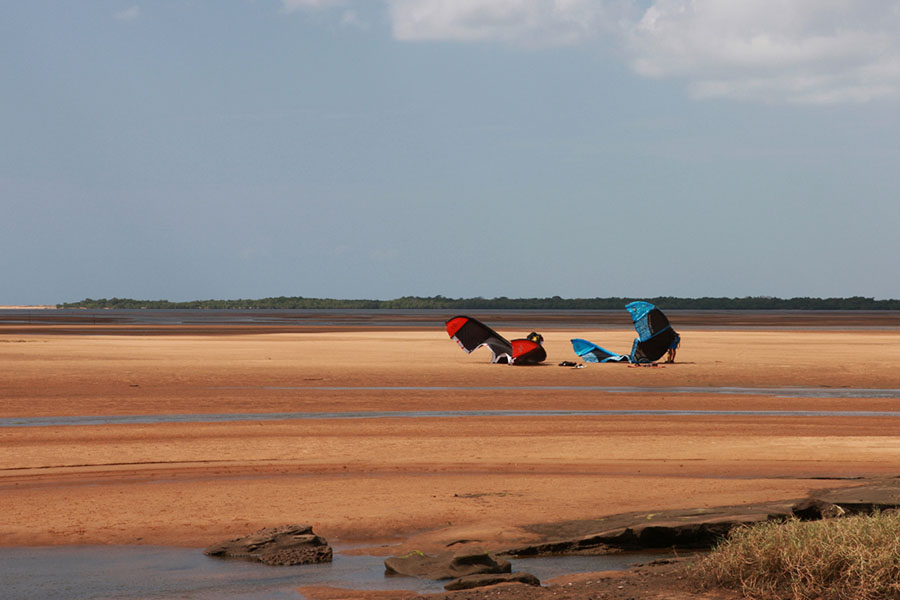 One of the biggest challenges communities face along this pristine coastline is access to clean drinking water. Through our passion for water sports, we aim to bring awareness to this need for clean water along the coast of northern Mozambique. 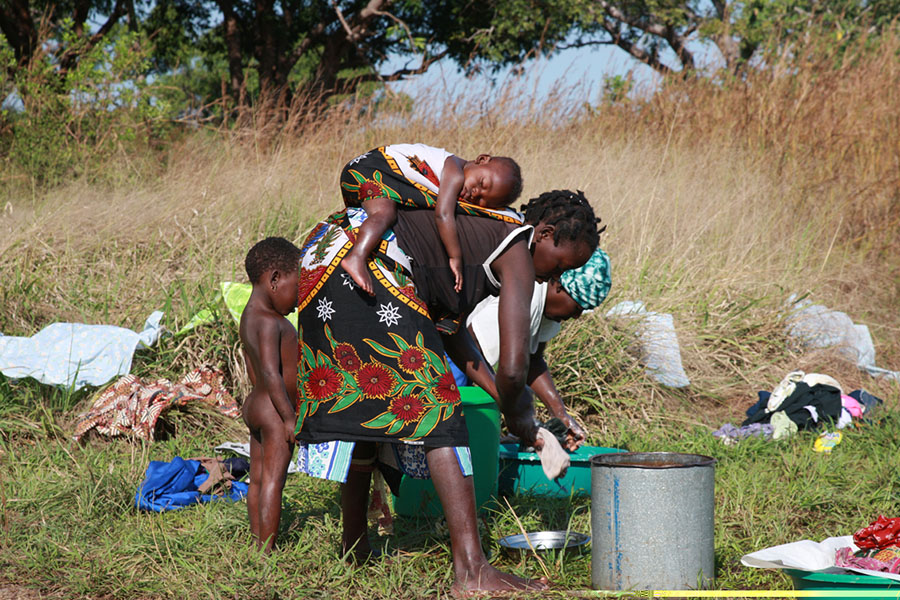 People have very kindly supported our kitesurf challenge and we have raised funds for a new well in Lumaumua village. Lumaumua is a sprawling fishing village hidden from the beach, with 485 residents relying on small-scale rice crops and predominantly using the sustainable method of spear fishing. 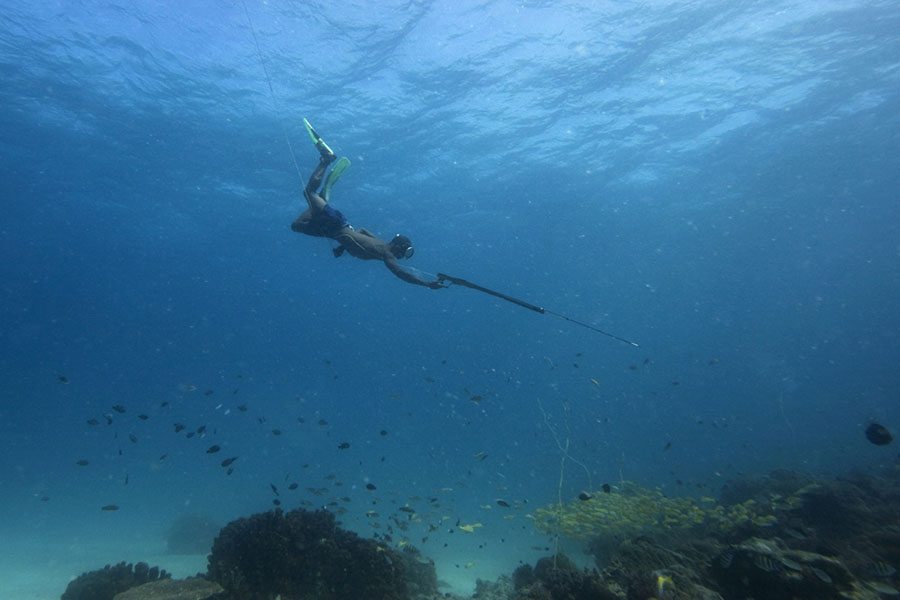 Lumaumua only has one well that has proven so insufficient that members of the village now resort to digging holes up to two meters depth to reach the water table.Nema Foundation will work together with Lumaumua, delivering the funds and helping to organize the technicians required, while Lumaumua will provide the labour and any local materials needed. Once a well is complete Nema, through their community volunteers, will provide training on sanitation and how to manage and maintain the well. 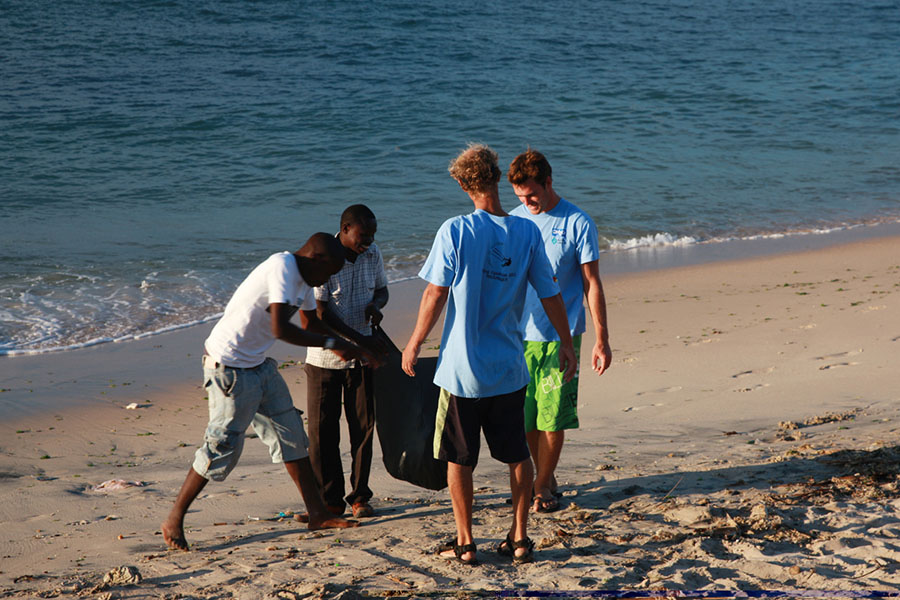 As three ambassadors of +H20 we organized a beach clean up on Wimbe beach in Pemba and involved the locals. We also visited a wind project in Mpandi village where the village has access to electricity and water, generated from the windmill. With the support of Water Charity, +H20 and Nema we hope to continue to raise the issue of clean water along the coast and do as much as possible to help. 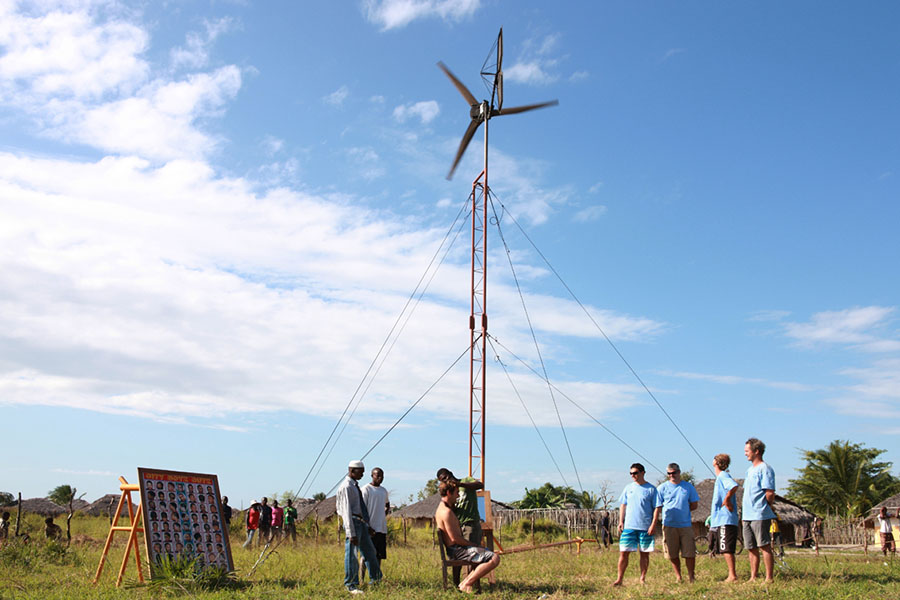 The coastline of Cabo Delgado is mainly populated by the Mwani people, who systematically integrated with the Macua and the Makonde people over the years. These coastal communities have embraced the ocean as a source of life and have adapted their ways to co exist.We’ve documented this way of life, which hugs Mozambique’s remote coastline. 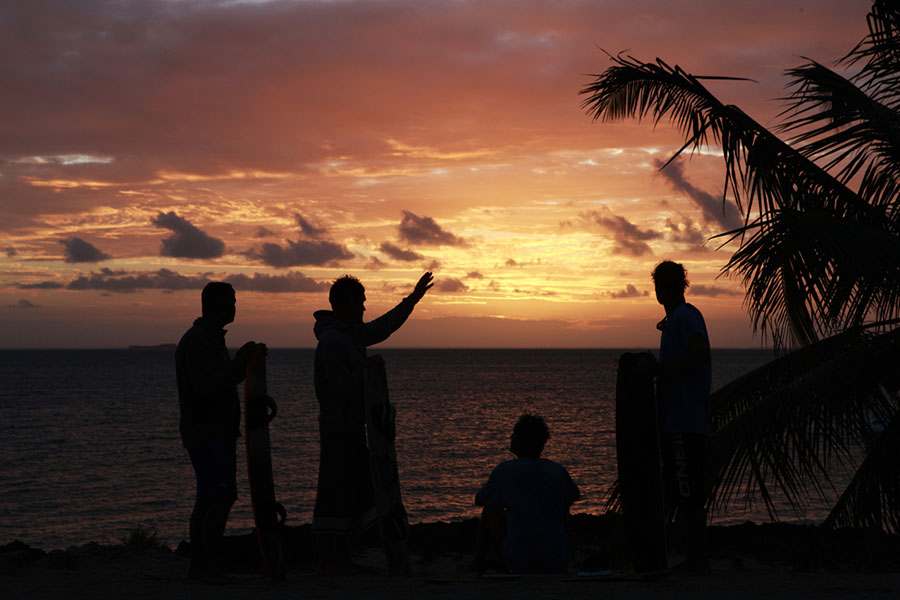